The Barnsley-based public sector specialists made its debut by teaming up with singer songwriter, Del Scott Miller.

The event took place at the DMC 02 in Barnsley and was available to watch via YouTube. 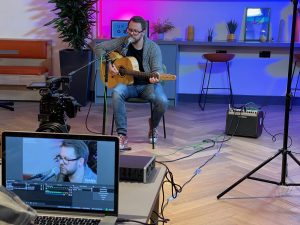 In an interview after the event, Del said:

“It’s been absolutely fantastic working with Deadline Digital. The communication’s been fantastic and preparations have been second to none, perfect in every aspect. As a musician, and speaking to other musicians, we’ve just had to do streaming off the cuff over the past two or three years. To work with a company like this who know exactly what they’re doing and leave no stone unturned has been an absolute privilege.” 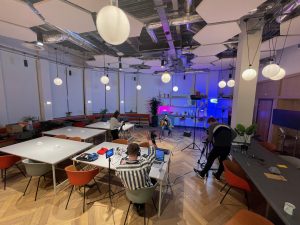 Behind the scenes: the Deadline Digital team in action. Left to right: Chloe Neal, Tom Johnstone and Ben Housam. 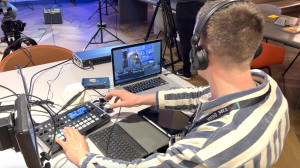 Tom Johnstone on the mixing board.

“The live stream with Del was great. We were able to use our creativity with the lighting set up and the fantastic setting of the DMC 02. The team were brilliant on the night and we’re really pleased with the results. A big thank you to Del too, he played some brilliant original tunes.”

You can watch the live stream in full here: