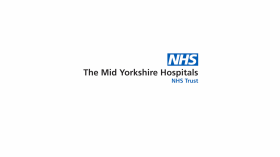 “Right from the first conversation, I was reassured that Deadline Digital understood what we wanted to achieve, had a range of options to suggest and were willing work with us to find the most cost-effective solution. Throughout the process, they were responsive and helpful and, on the filming days, the videographer was not only sensitive to the complexities of filming in a hospital setting but was also great at putting staff at their ease. We were extremely happy with the resulting video, which has received very positive feedback and which has got impressive stats on our social media feeds.”

Deadline Digital have worked with Mid Yorkshire Hospitals NHS Trust on a number of occasions to showcase the services they offer.  Most recently, we produced a fun, interactive video which charts the improvements the trust has made over the past few years.

We were commissioned by Mid Yorkshire Hospitals NHS Trust to produce a video which effectively conveyed key messages about the improvements the trust has made over recent years.

The client wanted a fun and visually engaging way to convey the information. We produced a ‘whiteboard’ video, where each subject holds up a blank whiteboard and the key messages are then added to it in the edit.

The process involved a day and a half filming for our videographer, which enabled us to feature a range of staff members from different areas of the trust.

Tom Johnstone (@TomDeadline) was our Videographer delivering the project:

“I thoroughly enjoyed this shoot, the schedule was tight but with the help of Vic and Amy we managed to capture plenty of great footage. Filming with such a large range of staff from Mid Yorkshire Hospitals was a real pleasure, they were all great!”