“I’m really happy with the video, I was a bit nervous as I’ve been bitten previously with editing. That said, I kinda knew I was in good hands when I met Tom and Paige. I was unbelievably nervous but thank you so much, it’s cracking and you got my vibe hardly knowing me. So thank you, you got me.”

Barnsley Council commissioned Deadline Digital to create a video for their campaign, ‘Alright Pal?’, to be released on World Suicide Prevention Day 2020.

Poet Jeff ‘Jethro’ Platts wrote his poem Alright Pal? for Barnsley Council’s campaign, and was filmed performing the poem across a variety of Barnsley based locations.

The video has also been performing strongly on Twitter, with over 10,000 views.

‘Alright Pal’ has received praise for both its powerful message and the sensitivity of the filming, with some comments also stating it’s encouraged them to reach out to people. 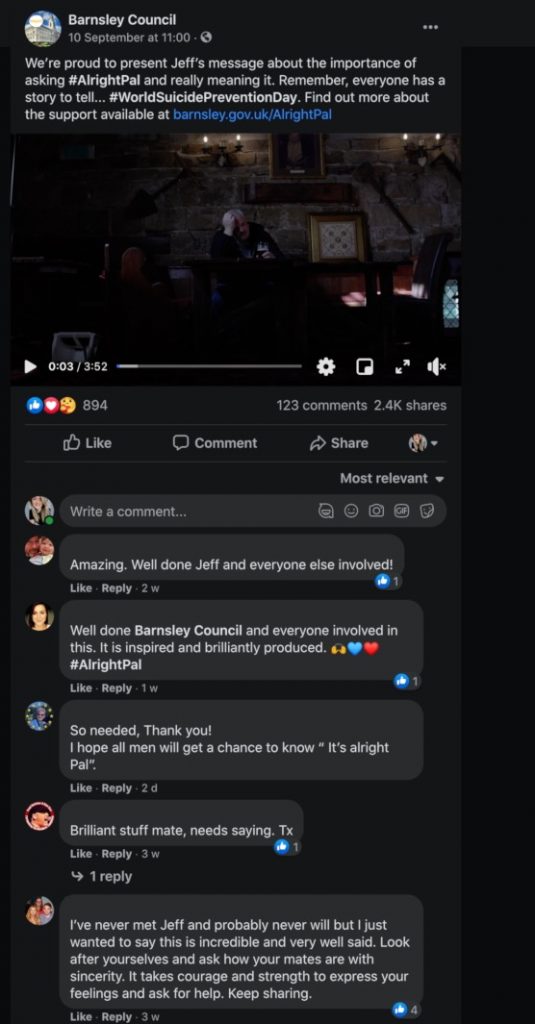 “I’ve never met Jeff and probably never will but I just wanted to say this is incredible and very well said. Look after yourselves and ask how your mates are with sincerity. It takes courage and strength to express your feelings and ask for help. Keep sharing.”

“Well done Barnsley Council and everyone involved in this. It is inspired and brilliantly produced”

“One of the best examples out there of #humancomms. Simple, but outstanding in making you stop and think.”

Jeff later commented: “I’m a bit overwhelmed by all this to be honest, thank you for all your kind comments. What is really really humbling is following a few shares people are asking THE question, making plans to catch up, call etc.” 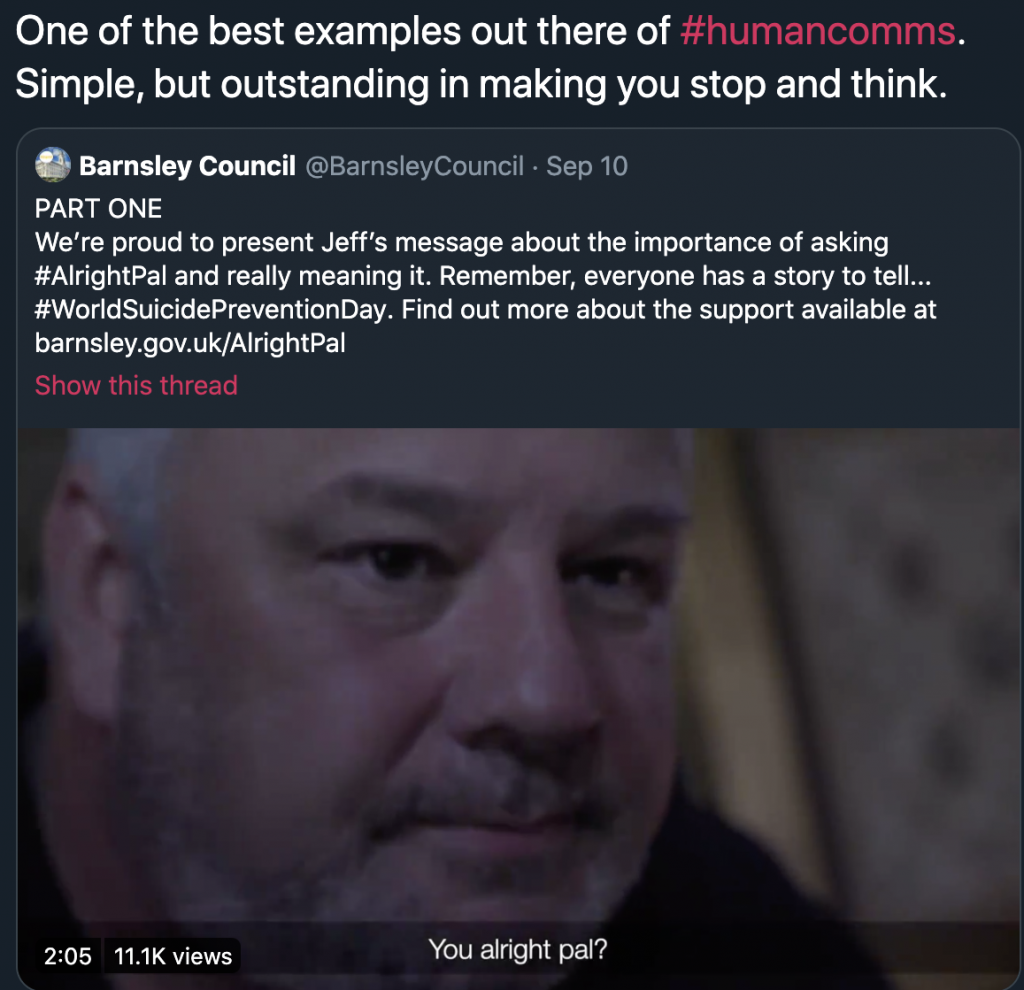 The video was produced on a tight deadline, from filming to distribution in just 5 days. Barnsley Council called the video a ‘masterpiece’ and have been blown away with the response it’s received.

Tom Johnstone (@TomDeadline), saw the project through from planning to delivery:

“Barnsley Council were brilliant to work with. They gave us a great creative brief whilst also giving us the freedom to have our own creative input as well.

“It was also a pleasure working with Jeff the poet. Well done to the Council for finding him – the film wouldn’t be the same without him!

“It’s been amazing to see how it’s been received online. Reading through the comments and seeing how it’s affected people really brings it home how impactful it’s been and how important the message is.”

The video has also been picked up by PR and communications blogger Dan Slee complimenting the use of human voice and delivery.

30 days of human comms #70: The Barnsley Council films to encourage blokes to open up #alrightpal 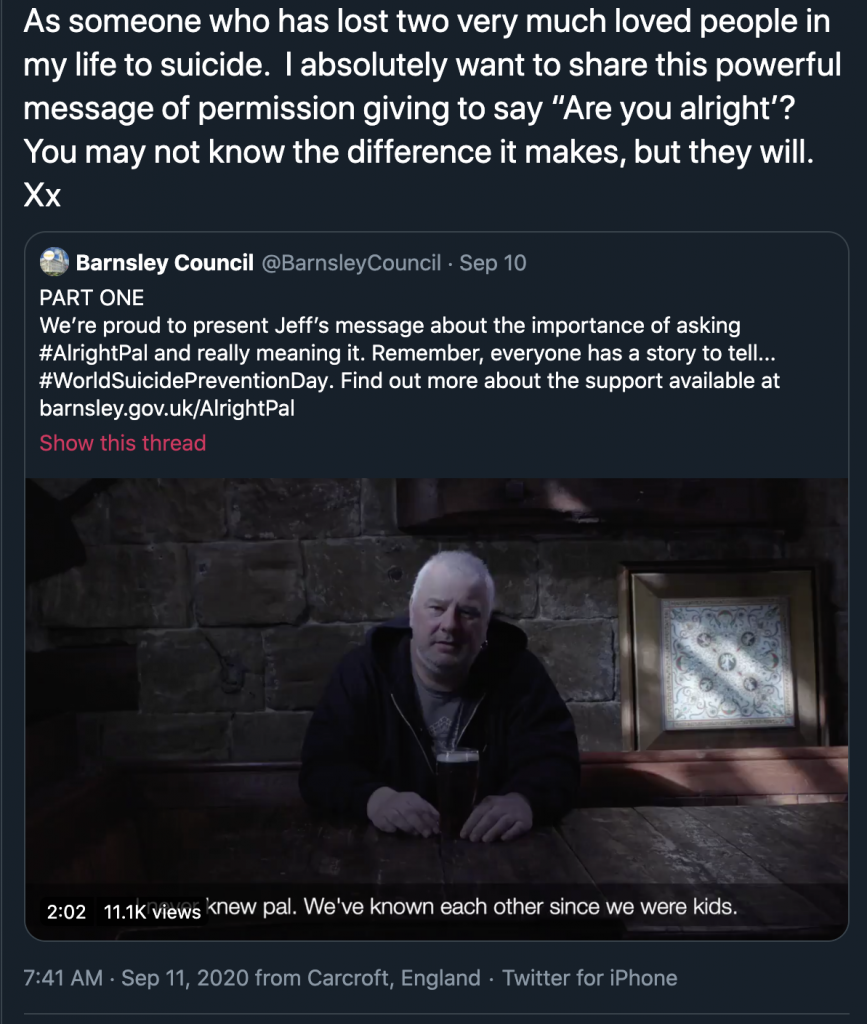