A documentary has been produced which tells the previously untold story of how a Halifax bomber crashed in to a Yorkshire village during World War Two.

‘Disaster at Darrington: The crash that history forgot’ was produced by Barnsley-based video production company Deadline Digital. The filming took place over the course of a year and the final documentary premiered in September 2019. 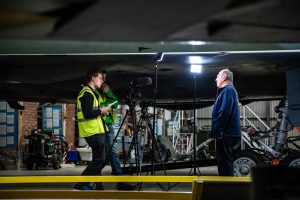 Twelve people died when Halifax bomber BB245 crashed in to Chapel Hill, Darrington, on 18th September 1943. The event had been largely forgotten until Darrington Parish Council hosted a 75th commemoration event in September 2018. The documentary was commissioned to ensure that the tragedy was never forgotten again.

The 45-minute film explores the circumstances surrounding the crash, as well as looking at the impact it had on families of the deceased and the village of Darrington. Interviewees include members of the Dean family (who lost four ancestors in the crash), descendants of the air crew, an aviation expert from Yorkshire Air Museum and an eye-witness from the night of the disaster.

“Deadline Digital have been the perfect media partner for Darrington Parish Council’s recent Commemoration Project. We needed a totally professional, experienced and competent video company to document the 75th Anniversary events of a tragic air crash into our village. 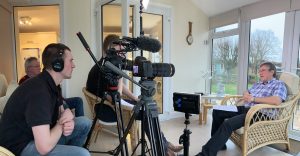 “Deadline Digital were all of that plus were very easy to work with. The resulting documentary was perfect!”

“There is a very human element to what happened in Darrington. We have put a lot of time and resource into it, it is such an interesting story. We think we have put together something really good that is interesting and emotional. It is quite moving in parts.”

“From a journalistic point of view, we want to tell interesting stories that touch people and resonate with people and this is certainly one of them.”

The film was shown for the first time at Darrington Golf Club on Saturday 14th September. It is now free to view on youtube: